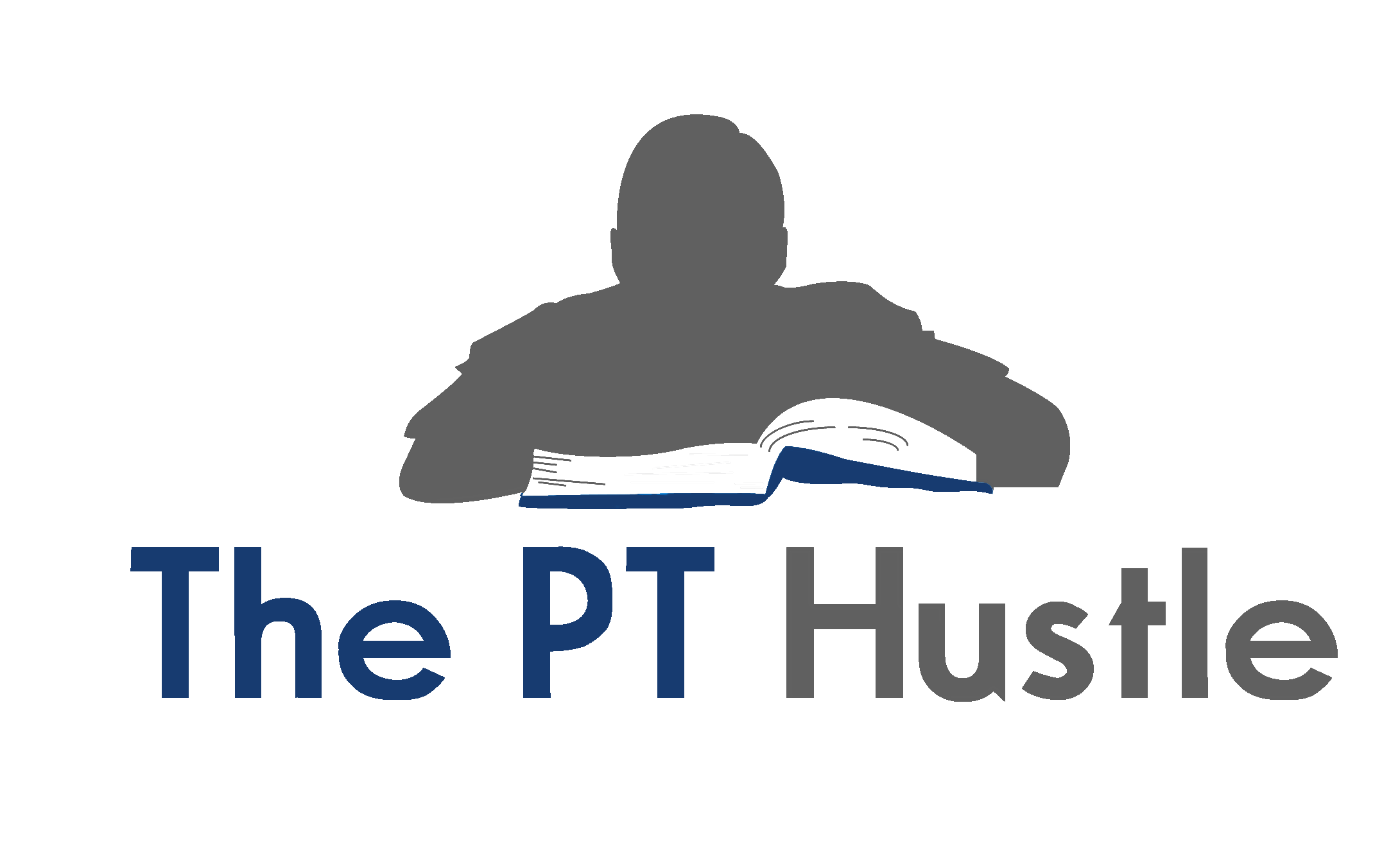 Hey SPT's! Check Out This Proven 12-Week Coaching Program To Help You Pass The NPTE!
(WITHOUT wasting time or money. Guaranteed.)
Kyle Rice's

NPTE Prep Success Coaching Program 4.0
SOLD OUT
Here's A Special Message For Any Coachable PT Student...
Who Feels Absolutely LOST About How To Prepare For The NPTE, But Needs To Pass In April 2020
Are you taking the NPTE soon?
Are you looking for the ULTIMATE structured program?
I'm Kyle Rice, Your NPTE Prep
Coach!
Over the past 6 years, I've helped thousands of PT students around the United States pass the NPTE.


I'm here to tell you the TRUTH that you need to know about the NPTE.

In fact, here is the #1 BIGGEST problem that you face right now ...

...It's believing that preparing for the NPTE is a complicated process.

Unfortunately, that's not the end of the problem. No, it actually gets much worse.

BECAUSE NOT PASSING THE UPCOMING NPTE MEANS THAT YOU CAN'T BE A LICENSED PT YET. AT THE VERY LEAST, YOU'LL HAVE TO WAIT FOR ANOTHER 3 MONTHS.

This means that you're not making your PT salary, loans are kicking in AND your life will remain ON HOLD.
​
AND, WORST OF ALL, MOST PT STUDENTS CAN'T GET PAST THE IDEA THAT THEY HAVE TO SPEND ENDLESS AMOUNTS OF HOURS PREPARING FOR THE NPTE.

Which simply isn't true!
But, Luckily For You
THERE'S NOW A SOLUTION
TO YOUR PROBLEM
But, before we get into that, let me share a quick story with you...
There I was, an awful standardized test taker all throughout high school and college. And then when I got to PT school, there was yet another standardized exam I had to take - the NPTE.
The thing is, I failed 13 standardized exams in my lifetime. And when I got to PT school, I was so afraid of the NPTE.
The big problem was that I tried so many times in the past to improve my standardized exam scores, but I still couldn't pass. I didn't know what my problem was, or a solution how to fix it.
The simple review courses, the reading textbooks cover to cover, just didn't work for me in the past. Which meant I knew I had to do something different if I finally wanted to pass the NPTE, so I could finally become a licensed physical therapist and make the money I deserved.
[ Then, as if by chance, something amazing happened.. ]
I reached out to an old friend, who got a perfect score on his MCAT in undergrad. I asked him what his secret was..

Instantly it became crystal clear to me how to stop wasting time to gain more knowledge on topics, because I already knew them. What I didn't have was the right mindset or proper test-taking strategies.
I realized it wasn't that I had a lack of knowledge or application. Instead, it happened to be something I never even thought about until I spoke with that old friend of mine.


My plan was to start getting serious about preparing for the boards 14 months before the NPTE..


So, I started studying the academic and application side of PT. I spent months learning about standardized exams and what influenced scores.
Everything that I found said how a non-traditional approach, including test taking strategies, endurance building, confidence & mindset training, are the keys to a high score on any standardized test.
But I didn't stop there...
I then spent the next year focusing on all of these factors and developing my own NPTE prep course for myself that included the knowledge, application, test-taking strategies, endurance, and mindset..
After that , I ended up getting a perfect 800 on the NPTE!
Bottom line: In the end, I was able to transform from failing literally every single standardized exam I took in the past, to achieving a perfect 800 score on the most important exam that stood in my way from becoming a physical therapist.
And that's when I decided I wanted to help PT students, just like me, pass the NPTE.
I Call It "The PT Hustle"
With The PT Hustle I can now help literally hundreds of PT students across the country achieve a 700 or higher on their NPTE!
And that's why I'm so excited to share this with you, so you can get these types of results, too!
So, here's what I've got for you today...
If you're a PT student who really needs to pass the NPTE, (even if you have absolutely no clue where to start or what to do differently on the next attempt)
Introducing... 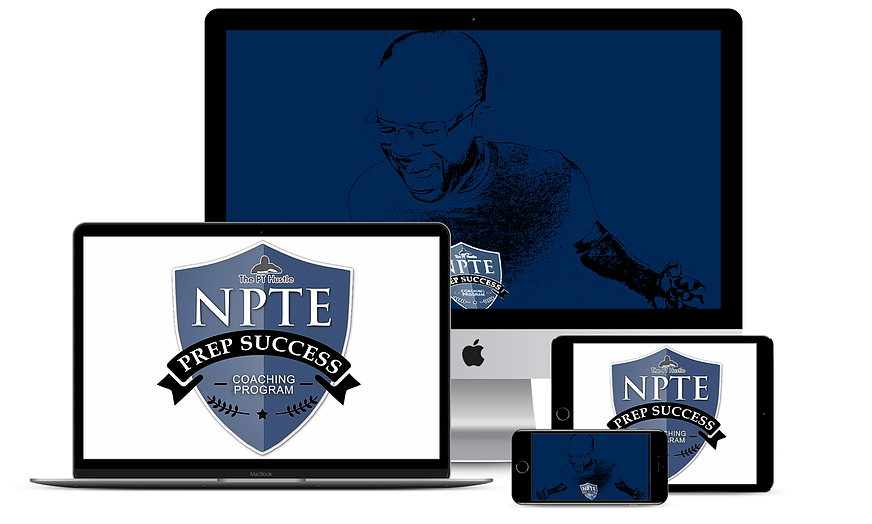 The NPTE Prep Success
Coaching Program Helps You..
• Prepare for the NPTE with structure and direction...
• Get over a 700 on your NPTE...
• Get your studying done effectively and efficiently...
• Stop wasting your time studying so much...
• Get that much closer to finally start earning the money you deserve as a clinician…
... and much, MUCH more!
And, best of all, you're capable of passing the NPTE (even if you have absolutely no clue how what you are going to do to prepare)
So Again, If You Are A PT Student Who Needs To Pass The NPTE, Understand This
• No other prep course will teach you all of this...
• No other review course will give you one-on-one time with an EXPERT throughout your entire prep...
• PT school doesn't teach you any non-traditional study approach to pass the NPTE...
• This Coaching Program is the most comprehensive step-by-step NPTE prep system available to help you get organized, accountable, and help you pass the NPTE on the next try.
APPLY NOW! BEFORE ALL SEATS ARE TAKEN!
CLICK HERE TO VIEW THE 4.0 SYLLABUS

Step-by-step guidance through every aspect of NPTE preparation, including calendar development and practice exam analysis.
​
This program is the ultimate tool for a student who enjoys a high level of structure in a plug and chug method.

36 additional pre-recorded highly requested lectures to watch whenever you want.
Three, 30-minute coaching/tutoring sessions with Dr. Kyle Rice to go over any topic. Whatever topic you need help with, get expert NPTE based explanation. 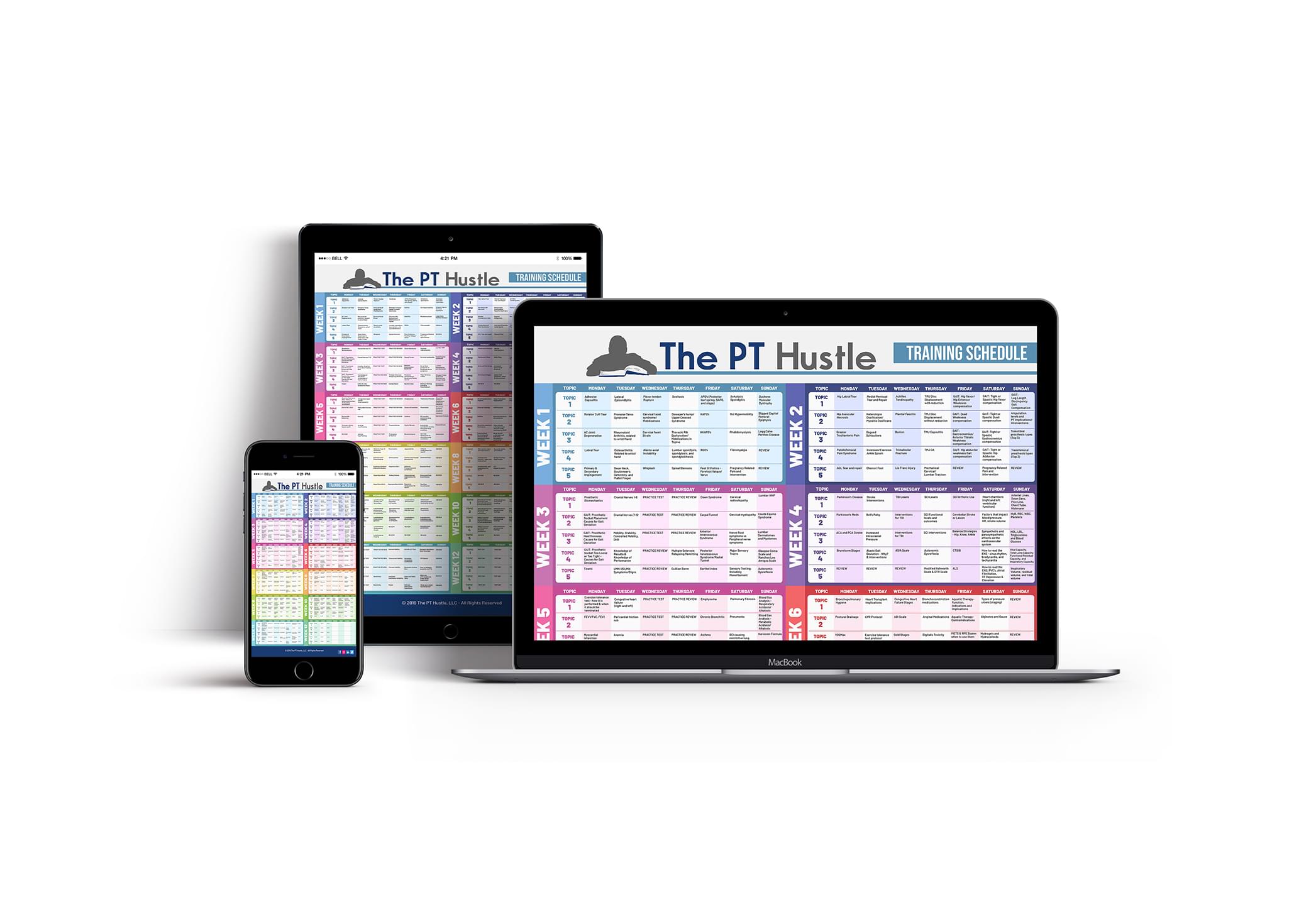 No student should have to waste precious time preparing for the wrong concepts.
With the PT Hustle Study Bundle, you will only focus on the most important concepts while being able to organize/categorize them into your personal calendar.
The PT Hustle Bundle Includes: Dr. Rice's Calendar, Unlimited Access to all NPTE Cheatsheets, Mini Practice Test, and "The Hitlist" w/ Textbook References. 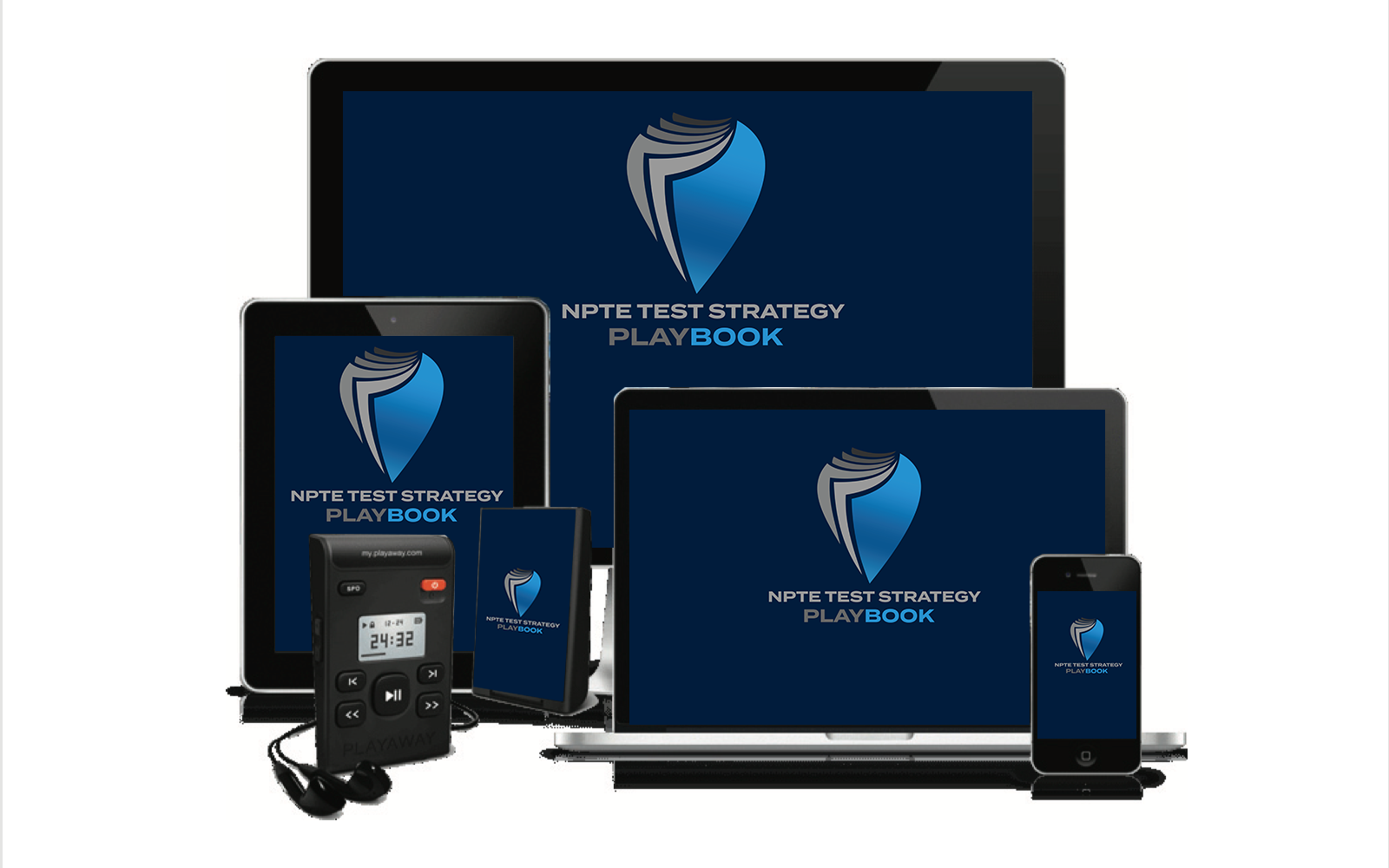 The ultimate test-taking strategy tool for "bad standardized test takers". ​
The playbook is an online training that walks you through how to answer every type of NPTE question with confidence.
This program is a must-have for students who have the knowledge but lack the "natural talent" when it comes to standardized tests. 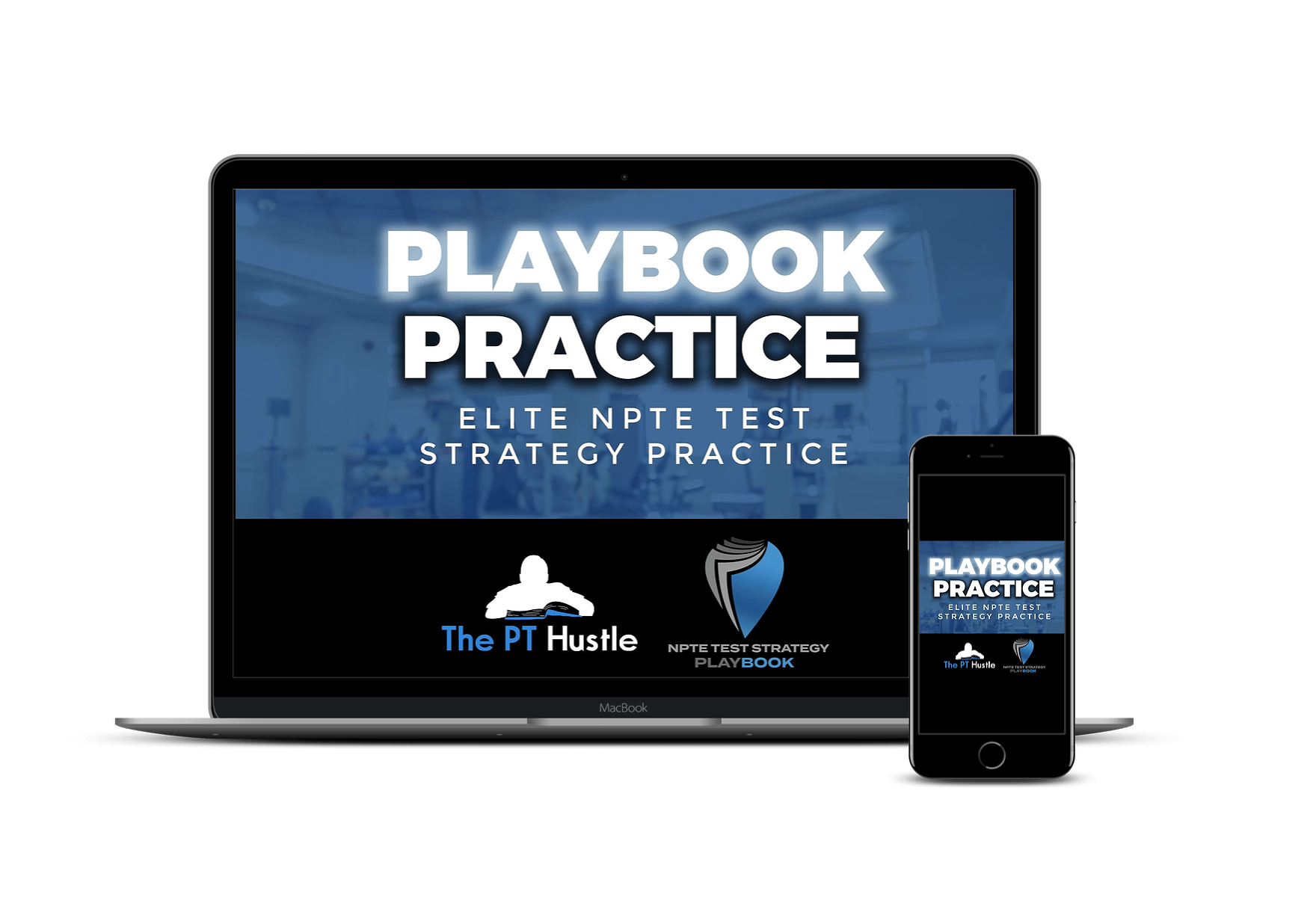 Need a program with questions? Each student will have the opportunity to answer 250+ practice questions throughout the program and guided through how to answer each one.  Each student will receive a complimentary 50 question practice test to accompany their full-length practice exams.
[ Once All 75 Seats Are Taken ]
The Class WILL BE SOLD OUT! NO EXCEPTIONS!
SOLD OUT
Here's A Recap Of [EVERYTHING YOU GET ]
Total Value = $4,487

SOLD OUT
What's the class like?
If you would like to review the class syllabus click here: CLASS SYLLABUS
Syllabi are updated one month before the start of the program.
When are the live class times held?
Classes are held at days/times listed below:
Monday Evenings: 5:00 PM - 6:15 PM EST
Thursday Evenings: 4:00 PM - 6:30 PM EST
Saturday Morning: 10:00 AM -12:30 PM EST
All classes/lectures are held on Zoom
Are there payment plans for the coaching program?
There are only two payment plans available, payment in full and payment over three months. You will be able to make your selection if you are are accepted to the program.
If you have selected a three month payment plan, your account will be debited on the same day each month. This will start the day you sign up and secure your seat in the class.
Is there a refund policy?
General Refunds:
There is a 14-day money back guarantee if you're not completely satisfied with your program.
If you would like a refund, please send an email to kyle.rice@thepthustle.com with the subject line: "COURSE REFUND", and an explanation of your dissatisfaction in the body of the email.
Pre Start-Date Refunds:
If you request a refund prior to the start date of the program, there will be a $100 application review/interview fee deducted from your full refund.
Who is the instructor?
Dr. Kyle Rice, PT, DPT, CMPT, OCS will lead all live lectures
How long will I have access to the course?
You will maintain access to all course materials until you pass the exam. No additional payment is required unless re-attending the next live class.
You must repurchase the course with a 50% discount if you would like to enter the next live class.
In other words, if you want to watch live lectures and reset your personalized coaching, you must repurchase the course. Please email kyle.rice@thepthustle.com for a repurchase discount.
How much time will I have to commit?
It is recommended that students not work or hold only a part time job of less than 20 hours per week.
This program requires 25-30 hours per week of NPTE preparation in the form of group assignments, personal assignments, private tutoring, live lectures, recorded lectures, and test taking strategy practice.
What type of NPTE results can I expect with this?
This program WILL provide you with every tool required to get over a 700 on the NPTE, regardless of your prior test scores.
However, results may vary depending on the each student's work ethic, committment, dedication, and willingness to adhere to the process. Success cannot be guaranteed as NPTE preparation is the responsibility of the student.
Dr. Kyle Rice, does personally guarantee that this program will provide all of the tools neccessary to help a student pass the NPTE.
Please see the refund policy FAQ for information on refunds and dissatisfaction.
What if I fail the NPTE?
Each student who does not pass will be given a complimentary 30 minute recovery and replanning session with Dr. Rice. The student will also retain full access to all prior lectures, materials, cheatsheets, and test strategies until you pass.
Remediation Certification
If you need a remediation certificate, you must contact kyle.rice@thepthustle.com before the start of your course.
In the email, please provide details of the state you're applying to and any special arrangements that need to be made on your behalf.
Terms and Conditions
Privacy Policy
© 2020 The PT Hustle - All Rights Reserved
NPTE® and NPTAE® are Registered Trademarks of the FSBPT who hold no affiliation with The PT Hustle